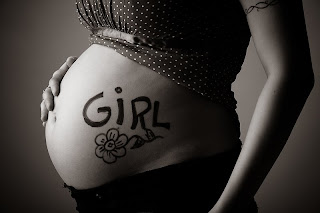 nineteen years ago... we sat at my kitchen table.  it was mid-summer and she was spending the summer in new york city rather than her suburban hometown.  she told me she thought she was pregnant. i didn't want to believe it. i didn't want her to be pregnant.  being pregnant meant that we weren't little girls anymore.  i mean i would still be the little girl but she'd be the woman.  i think back to then and realize that... wow, we were never really close after that summer...

i took my $20 weekly allowance and bought a $10 pregnancy test.  we needed to know.  we had been hanging out kinda tough and we had been drinking. she had been pregnant once before.  her father took her to get an abortion and afterward cursed her, telling her she'd be knocked up again in 6 months.  through tears she swore she wouldn't be.  she swore she'd be a good girl, get good grades, stay away from boys.  4 months later we sat in my bathroom, her on the commode, me on the side of the tub and cried because that clear blue easy line appeared and got darker and darker and our suspicions were confirmed and WE felt like WE failed.

i asked her what she was gonna do.  i had friends who got free abortions.  i kept the number just in case i ever slipped up.  she didn't have to return home to handle her business, WE could get her a free abortion right away, act like nothing ever happened and she'd return home in august as if our summer was filled with fun and good times.  she must have wrestled with that thought all night because the next morning, with red rimmed eyes, she looked at me and told me SHE was keeping her baby. damn what her father said and felt. damn that free abortion that i told her about. the 1st child was aborted and that was all her father's idea, but this 2nd child was created in love and keeping this was her conviction.

for the next 2 weeks i cooked every meal for her - breakfast, lunch, dinner and snacks.  one day i chased the ice cream truck halfway down the block because she was feigning for a chocolate cone with sprinkles.  with my following week's allowance, i bought her a huge jar of palmer's cocoa butter for her belly that hadn't stretched at all, but we knew it would.

she returned home and didn't tell her parents a word.  she hid her pregnancy and put up a front every month as if she was receiving her cycle.  eventually her mother found out and told my mother and my mum, the clairvoyant one, she knew that i knew... could remember that one week when my penny pinching self spent all of my allowance in 2 days.

nineteen years later... and this young lady is now a happy and successful woman.  she is married to the love of her life, she has 3 beautiful children, owns a home, owns 2 cars and her eighteen year old daughter has gone to her prom and has earned her high school diploma.  as i beamed at my little cousin's prom and graduation pics i couldn't help but think of that summer and admire my cousin's determination to keep her baby.  it wasn't easy.  my cousin leaned and depended on her parents for years!  slowly but surely she gained her independence and handled her grown womanness.  if she listened to me, there'd be no celebration taking place, no tears of joy, no witness to God's miracle of life - and i'm glad that she was determined to do things her way.